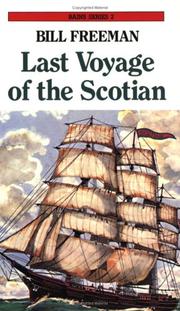 Set against a background of gritty, hard-driving sailors and square-rigged ships, The Last Voyage of the Scotian is the story of two young people determined to survive in a harsh world. The book is illustrated with photos showing the glories and hardships of the great age of sail. The Last Voyage of the Scotian by Bill Freeman About this title: In the spring of , Meg and John Bains are ready to return home from a winter working in a lumber camp when they are lured into a trap and shanghaied as crew on a leaky old square-rigged sailing ship in Quebec City.   One of the many pleasures of Marina Endicott’s exhilarating new novel, THE VOYAGE OF THE MORNING LIGHT (Norton, pp., paper, $), is its . In April the Scottish National Antarctic Expedition, led by William Speirs Bruce, sailed north on their ship SY Scotia at the start of their voyage home after over a year surveying the South Orkney Islands. A collection of nearly stereographic glass plate negatives of photographs taken on this expedition, mostly by Bruce himself, is the subject of this 'Book of the Month' feature.

The Last Voyage of the Andrea Doria is a stunning, captivating, and thorough account of the wreck, sinking and aftermath of the eponymous luxury liner that did everything right that the Titanic did wrong and sank anyway. King and Wilson’s harrowing account of the ship’s final sail before tragedy struck reads like fiction/5(65). The Voyage of the "Scotia": Being the Record of a Voyage of Exploration in Antarctic Seas Robert Neal Rudmose Brown, Robert Cockburn Mossman, J. H. Harvey Pirie W. Blackwood and sons, - Antarctica - pages. Scotia was a British passenger liner operated by the Cunard Line that won the Blue Riband in for the fastest westbound transatlantic voyage. She was the last oceangoing paddle steamer, and as late as she made Cunard's second fastest up in , Scotia was converted to a twin-screw cable layer in She served in her new role for twenty-five years until she was wrecked. Voyage of the Scotia An online exhibition of photographs and related materials from the Scottish National Antarctic Expedition , highlighting the contribution to polar exploration and research made by Scotland and by William S Bruce, initiator and leader of the expedition.